On the Edge: Part 1 Standing on the Sidelines 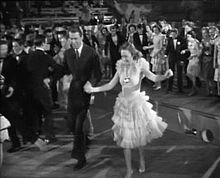 One of my favorite movies is “It’s a Wonderful Life”.   I love the scene where George Bailey (played by Jimmy Stewart) & Mary Hatch – later Bailey (played by Donna Reed) are at the high school dance caught up in the Charleston contest.  In the scene a jealous rival (trivia moment: played by the actor who played Alfalfa in the Little Rascals) finds out that the gym floor opens up to reveal a pool and that George was dancing right over the opening and that the button to open the floor was right in front of him.  As most of us know, the rival presses the button and after several dance moves the couple finds themselves falling into the pool.

As the couple is dancing they continue to get dangerously close to the edge and can see the reaction of those around them, however; they have no idea it’s because of pending misfortune for the couple.  George thinks that they are being watched because of the great job they are doing.

I’ve spoken with hundreds of families and I can share with you that a recurring theme is: we knew something was changing but we didn’t know what to do.  Unfortunately, many times, that led to the family doing nothing.

When you see someone headed for potential harm, whether it is the effects of medication, increasing depression or potential addiction, standing by and watching can lead to the need for re-active decision-making, guilt and unnecessary pain.  Certainly. there is always a chance that we say something and the person still goes down the same path, however; we will never know unless we take that step.

Sue has a Master's degree in Gerontology and has worked with the elderly and their families for over 30 years and is the Author of "Along Comes Grandpa", a caregiving resource guide, and the novel "If I Walked in Her Shoes". As an ElderCare Expert and Keynote Speaker, Sue employs her comprehensive experience and passion, to educate and promote self-care values to family caregivers and the community at large.
View all posts by Sue Salach →
This entry was posted in aging, boomers, caregiving, eldercare, sandwich generation and tagged aging, boomers, caregiver, caregiving, caregiving and stress, Christmas, Donna Reed, eldercare, holidays, It's a wonderful life, Jimmy Stewart, meditation and self reflection, sandwich generation, speak up, support. Bookmark the permalink.

10 Responses to On the Edge: Part 1 Standing on the Sidelines