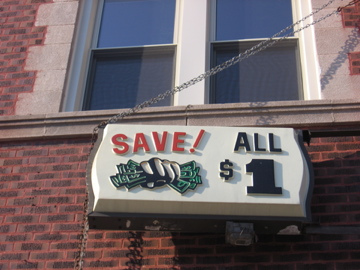 I was just thinking how sometimes we have this “Dollar Store Mentality” and it bleeds over into so many aspects of our lives. Who ever told us “cheaper” was better?

My Mom is the queen of the dollar store and bargain hunters and so was my ex-husband (he used to buy generic beer, for goodness sake). Anywhoo! I get that we all like finding a bargain. When I first moved to Illinois I started an EBAY business. I love shopping for Vintage clothing and I thought I could do that with a few hundred bucks and sell them on EBAY and make a profit. It worked for a while and I made a few hundred dollars but now, things have slowed down and I have a bunch of “bargains” (aka – crap) in the top of my closet waiting for someone to adopt it.

Sometimes while trying to find a bargain we wind up with stuff that doesn’t last, wears out quickly and I suppose we get what we pay for. I just recently thought I would save some bucks and purchase an inexpensive eye liner from Target (the ones I used to pay $20 bucks each for) and I paid about $3.00 for this cheap model and brought it home. It has been a royal pain in my patookie because when I sharpen it, it eats up most of it and winds up in the pencil sharpener and in the trash. So now I have this half a pencil in my makeup bag that is really more of a hassle than the other more expensive brand that used to last me at least a year.

While thinking about this I realized we do the same things in other areas of our lives, trying to cut corners. I recently spoke with someone who was at the point of needing an in-home caregiver for their parent. I provided several referrals who I know personally are the “best of the best” and that I would use myself. However, when following up with that person to see how it went or if I could help any further, they informed me that they went with someone other than who I had referred, who was “cheaper” and who I know does not have a good reputation in the industry. The main point being, they were cheap!

Okay, so you’re going to go with the cheapest because…..it’s cheap! So here’s what I want you to watch out for now – this company may not provide background checks on their employees that are going to be going into your parents’ home, they may steal their personal possessions, they may not show up when they are supposed to and you’ll have to leave work to go make sure mom gets to the doctor or takes her pills, they may be abusive to them and you’ll have no idea of knowing….But hey, at least you can keep the costs down and save yourself some money so that when Mom or Dad passes, you’ll be sure to get your inheritance.

I know, I’m being a little extreme, but this is CARE we are talking about. Not a plastic cup from Dollar General.

Here’s a FREE Download of Private_Duty_Buyers_Guide by Bright Star Home Care. And more great information and updates, check out their blog.

Sue has a Master's degree in Gerontology and has worked with the elderly and their families for over 30 years and is the Author of "Along Comes Grandpa", a caregiving resource guide, and the novel "If I Walked in Her Shoes". As an ElderCare Expert and Keynote Speaker, Sue employs her comprehensive experience and passion, to educate and promote self-care values to family caregivers and the community at large.
View all posts by Sue Salach →
This entry was posted in caregiving and tagged abuse of caregivers, Bright Star, Bright Star Home Care, Bright Star of Chicago, caregiving, cheap, cheap skates, finding cheap home care, home health agencies, home health care, in home care, In Home Caregiving, what to look for when choosing at home care. Bookmark the permalink.