You think the eye exam is tough for YOU; what about if you had Alzheimer’s 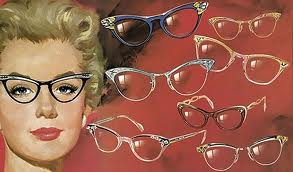 I recently treated myself to an eye exam (since I was turning 46) and was tired of carrying my readers everywhere I went and I refused to get the “old lady” chain around my neck (I didn’t realize I was so vain). So I made my appointment at the local Pearl Vision down the street. I was so excited because I was constantly aggravated about not being able to see.

Upon arrival I began the search for the “perfect pair” of glasses while I waited for my eye appointment. I was blown away by the prices of frames, especially the designer frames, because WHO WANTS A BO-BO PAIR OF GLASSES? Price narrowed it down to two pair and I asked the chick at the counter to holds those for me while I had my exam.

When they called my name to meet with the eye doctor it was as if I heard music “dom de di dom”…and I followed a spotlight down the hallway to the exam room, as if it was lighting the way. As we worked through those awkward few moments of getting to know one another I was thinking to myself, “Enough already, can’t we just do this and get it over with?” And then it began.

Frame after frame, slide after slide, everything was starting to look the same. I was even nervously laughing out loud at myself and telling the doctor, “hell, I don’t know – it all looks the same at this point, my eyes are all jacked up.” Okay, I probably should have been a little less outspoken because now he has the power to completely screw me over and prescribe me the wrong lens on purpose. (maybe I’m a little paranoid at this point?)

Two weeks later I’m still trying to adjust to my new progressive lens. I had no idea how blind I really was when watching TV – now it’s as everything is in 3D, or so it appears. The problem is I STILL CANNOT READ which is the main thing I needed and my eyes are not adjusting. Meanwhile, back at the store……I take my glasses and explain to them the problem and the Dr. is changing my prescription from 1.75 to 2.25 (that’s a HUGE difference) but I’m hoping that anything will help.

While discussing these issues with my husband Nick he replies, “try taking that eye exam when you have Alzheimer’s, that’s what I had to go through with my mom.” He went on to describe how THAT went and I was trying to put myself in his shoes. If that exam was tough for me and I am in my right mind (for the most part) and how frustrated I became during it, what must it be like to have dementia or Alzheimer’s and experience something like this? Or, being the caregiver of someone having to go through this. This was something I had never contemplated and puts things in a whole new perspective.

Here are some questions and solutions that I came across regarding this issue (I felt they were worth sharing):

From Nina, in NC: “We have been having this problem for 6 months. In Dec. my FIL said his eyeglasses’ frame is kind of not working (the caregiver told us too.) So we set him up with the new prescription for the new eyeglasses. We got it in Jan. But it was bifocal glasses. He loves the new frame. But he said the glasses are not clear. Apparently as an AD patient, he failed the eye exam and mixed it up with the result so the prescription is not correct. I thought about that but my husband said his Dad was sure in the eyeglasses store. (I was not there at that time.) Now it is back to his old glasses which is at least 5 years old. We tried to take off the bifocal as he does not read anymore and make it straight, and it still does not work. We are thinking about putting the new frames with the old lens or old prescription. Any ideas? Is it true the AD patient cannot judge properly during the eye exam? Or it is the store’s fault? He has stage 6 AD.”

Experts reply: “Wow did you ever take me back! I went this with my Dad. Eye doctors can get a close RX for someone who can’t take the test properly, but they’ll never be right on (at least from my experience). With my dad, we finally had to just go with new frames and the old prescription, because there was no way he could do an accurate test. It depends, of course, on the stage of the dementia, but it makes sense that this sort of thing is going to be hard for them. The frustration is that you are trying to take the best care of him that you can, but you can’t take the eye test for him. I really do feel for you, Nina. I know how hard you try. I don’t have any real advice to give, just sympathy. Talk with the doctor and see what he says. You may want to try a second doctor and exam, but who knows if you’ll get better results? This type of test is hard for someone with dementia to do. They are likely to say what they think the doctor wants to hear, because they may not really understand what is going on (or remember it all through the exam).

And there you have it. If the test is difficult for someone of my age without dementia imagine what it’s like for them? Try to empathize with them while supporting them the best possible way.

I’m hoping my eyeglass saga will end once I receive my new lens, I’m optimistic!

Sue has a Master's degree in Gerontology and has worked with the elderly and their families for over 30 years and is the Author of "Along Comes Grandpa", a caregiving resource guide, and the novel "If I Walked in Her Shoes". As an ElderCare Expert and Keynote Speaker, Sue employs her comprehensive experience and passion, to educate and promote self-care values to family caregivers and the community at large.
View all posts by Sue Salach →
This entry was posted in caregiving and tagged alzheimers, caregiving, caring for a parent, eye exam, eye exam for Alzheimer's patient, parent with Alzheimer's. Bookmark the permalink.