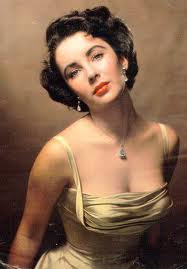 So we said our good-byes to a Hollywood legend yesterday, Elizabeth Taylor, who passed away at 79 from congestive heart failure.

In reading some of her life story it appeared to me that she was extremely high maintenance. Now the reason I’m interested in this is because before Nick and I married, my mother pulled him aside (without my knowledge) and told him and I quote, “Be prepared. She’s very high maintenance.” I have no idea what she was referring to – to this day.

With that being said I will gladly share 7 reasons why I’m glad I’m not Elizabeth Taylor:

Putting all kidding aside she was also known to be one of the greatest contributors to HIV/AIDS research.

When it came to her work with HIV/AIDS-related charities, including the American Foundation for AIDS Research, better known as amfAR, and her own Elizabeth Taylor HIV/AIDS Foundation, the actress was an unstoppable force committed to doing all she could to see the public educated about the realities of the disease.

After her good friend Rock Hudson died from complications from AIDS, Taylor, alongside Dr. Michael S. Gottlieb, created the National AIDS Research Foundation in Los Angeles, which merged with the New York-based AIDS Medical Foundation in September 1985 to become amfAR, an international nonprofit organization dedicated to evidence-based AIDS-related public policy, securing and raising funds for HIV/AIDS research, expanding access to care and treatment for all AIDS patients and protecting the civil rights of those living with the disease.

At the time of its creation, Taylor was named Founding National Chairman of amfAR. The organization continues to be one of the world’s leading organizations dedicated to fighting the AIDS epidemic, and has raised nearly $325 million to fund its multifaceted mission. Taylor herself is said to have raised over $50 million in funds for the cause and for that, my hat goes off to her.

Sue has a Master's degree in Gerontology and has worked with the elderly and their families for over 30 years and is the Author of "Along Comes Grandpa", a caregiving resource guide, and the novel "If I Walked in Her Shoes". As an ElderCare Expert and Keynote Speaker, Sue employs her comprehensive experience and passion, to educate and promote self-care values to family caregivers and the community at large.
View all posts by Sue Salach →
This entry was posted in dying and tagged aids, dying, elizabeth taylor, elizabeth taylor dying, high maintenence, hiv, hollywood, humanitarian. Bookmark the permalink.